Yeri de la Cruz Lorenzo 25 years old. She is a housewife and takes care of the family. She is the mother of four children and stepmother of two children. The family is made of 8 people. Her husband is William Reyes; he is a farmer and plants beans, pigeon peas, Yucca, corn and avocado. He works in the fields of his father or his mother, plots that they assigned him to use for his own.

Yeiri, got first grade of high school and thinks one day to continue on her school education. She suffers of diabetes, she needs to use insulin regularly which she buys in San Juan de La Maguana, the Capital city of his Province.

She spend all day in the house taking care of the family, but when she gets free time she plays funny games with her children and in other occasion she helps her husband with the crops. They have been together for ten years.

William Reyes (Husband) met his wife one day long ago when she was passing by his house when she was returning to her home, immediately he greet her and introduced his self and offer to accompany her to walk and talk, she agreed. That day he knew she will be his wife. And so it was.

He hardly read and write because he did only the first grade of elementary school. He grow up with his grandpa and they must work to get their food and clothing. Her mother left him to go to Santo Domingo, the Capital City, to work as a housemaid to support her family, but of course it was not much money, it were very hard times for all of them.

He began to work helping his grandpa and his uncle since he was a child and so he learned to work and when he was 14 he became a day laborer receiving a daily payment in the neighboring farms.

When William was 20 years old decided to follow his mother path. He went to the Capital City to try his luck.  He worked in a Car Wash where shortly realized that this was a wrong bet for him, some days he had nothing to eat and finally he returned to his town with the stronger decision to work the fields the worked before, the only work he can do and the one that knew perfectly.

He bought the plot of land where they have built their house about 20 years ago. This is a poor house but theirs. They also own a horse that helps to work in the fields carrying the crops or the fertilizers, water for fumigation or irrigation, etc.

On free day, he takes his wife and children to the river where they swim and cook chicken or fish. This is the best moment for the family, the children never wants to leave the river. They love it. The river is about 20 minutes walking.

He also takes his family to visit his mother who is now living in the town of Gajo Largo. His grandpa, the one who raised him up passed away last February.

When the family knew that there was an Organization (Bridges to Community) planning to work with the community building houses, latrines or schools they felt very happy. Shortly, in their community the organization began to build a house and then some latrines, projects of fruit trees for the families. They felt hopeful, they were candidates to be benefited as they have a very old latrine in bad shape, out of use and their house is in bad condition too. With the arrival of COVID 19 everything stopped.  Life became harder, they couldn’t buy fertilizers nor sell their crops, everybody was afraid.

Thanks God, slowly everything is settling down and improving. Today they were told they will have a strong and safe house.

Yeiri and William words: “Our house is old and the woods are rotten, we are more scared of the winds than the rains. It is been a blessing for us. May God bless the Donors. 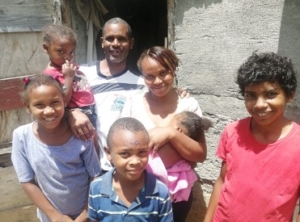 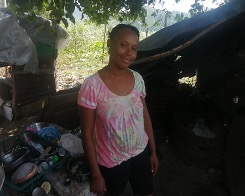 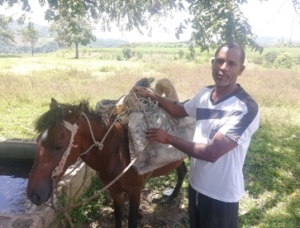 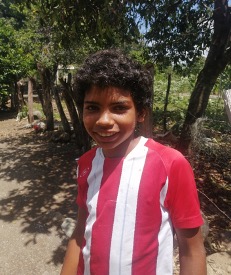 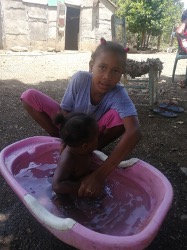 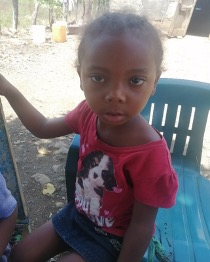 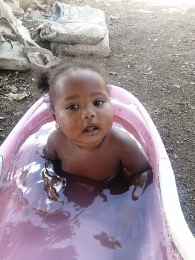 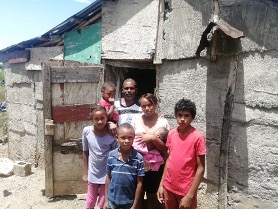